Fujitsu has is taking healthcare technology solutions to the next level – one step at a time. The global tech company unveiled an innovation on Wednesday, 18 September 2019, that allows medical professionals to digitise the walking habits of their patients.

According to Fujitsu, many doctors and physicians can identify the symptoms of their patients simply by observing their way of walking. However, finding a way to digitise these symptoms – due to diversity in walking characteristics that differ depending on the type and severity of the disease – has proven to be a challenge.

The question is – why would the medical industry what to digitise this process at all? Even though it’s proving to be a rather difficult feat, integrating patient behaviour with this technology should not only give healthcare practitioners a more accurate view of diseases and their symptoms but also allow the patient to record their recovery process.

Fujitsu’s technology automatically quantifies factors such as the swing time and stance time of the right and left leg as well as the difference between the movements of both legs. This is recorded through the change of movement using signal waveforms emitted from gyro sensors attached to the patients’ ankles. 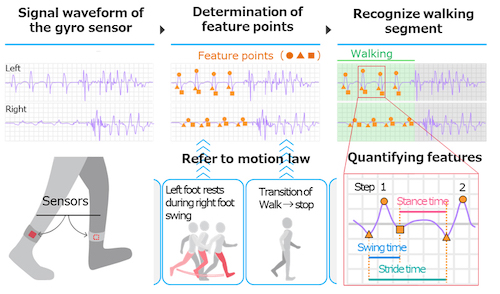 Fujitsu uses sensors to record walking abnormalities. The data is plotted against several walking characteristics. The walking behaviour of the patient is determined and reported.

“In the medical field, it is essential to analyse the walking of patients to examine their changing symptoms and recovery status. It is well known that symptoms such as musculoskeletal, neural and cardiovascular conditions cause walking abnormalities,” says the company in a statement. “Accordingly, there was a demand for a walking analysis technology that could digitally capture the same information as physiotherapists in detecting early signs of disease symptoms”.

The Fujitsu developed technology evaluates 9 types of walking abnormalities – including short steps, circumduction and shuffling. Recording this data means an accurate calculation of multiple walking characteristics can be formed.

Blockchain Technology in Healthcare: What is it?

The 6 reasons why Huawei gives the US and its allies security nightmares –...