The US manufacturing sector has entered recession—defined as two quarters of contraction—the Institute for Supply Management said Tuesday, falling to the lowest level since the immediate aftermath of the 2008 financial crash.

The figure is only the latest in a series of negative economic indicators that contributed to a substantial selloff in the US and global stock market Wednesday.

The World Trade Organization (WTO) said that growth in trade this year would be the lowest in a decade, amid the eruption of a trade war that it called a “destructive cycle of recrimination.”

Markets around the world plunged in response to the figures. The Dow Jones Industrial Average fell 494.42 points, or 1.9 percent, after a 1.3 percent drop the day before. The S&P 500 had its worst two-day selloff of the year. All three major US stock indexes are below their values over the past 12 months.

The UK stock market had its worst day in over three years, with the FTSE 100 closing 3.2 percent lower. 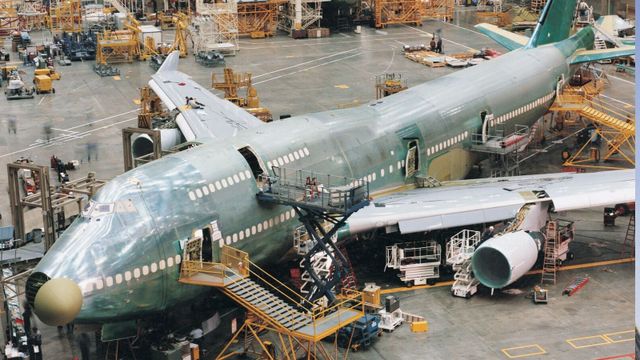 Aircraft being assembled [via Canva Pro]

But the global trade war, which is dragging down economic growth worldwide, is only intensifying. After the markets closed Wednesday, the White House announced the imposition of an additional $7.5 billion in tariffs on imports from the European Union.

The measures, targeting European aircraft, will be the most aggressive US trade measures against the EU since Washington imposed tariffs on steel and aluminum last year.

The negative economic figures are putting increased pressure on the Federal Reserve board to cut interest rates at its next meeting this month. The Wall Street Journal reported that the likelihood of another Federal Reserve rate cut this year rose to 89 percent, up from 73 percent a week earlier.

Responding to the negative economic data Tuesday, US president Donald Trump wrote on Twitter: “As I predicted, Jay Powell and the Federal Reserve have allowed the Dollar to get so strong, especially relative to ALL other currencies, that our manufacturers are being negatively affected. Fed Rate too high. They are their own worst enemies, they don’t have a clue. Pathetic!”

Trump has repeatedly demanded that the Federal Reserve take a more accommodative monetary policy, and has sought to blame it for a slump in the stock market.

Under pressure from Trump and substantial sections of Wall Street, the Federal Reserve has abruptly reversed course from its plans to “normalize” monetary policy after a decade of bailouts, “quantitative easing,” and zero percent interest rates.

The Fed had originally intended to continue raising interest rates through this year. It has become clear to a growing section of economic opinion-makers, however, that it will never be possible to “normalize” monetary policy.

Instead, a broad range of “fringe” monetary theories, many closely aligning with the sentiments expressed by Trump on Twitter, are gaining popularity among financiers and even economists.

Bloomberg, in an article titled “A Long-Despised and Risky Economic Doctrine Is Now a Hot Idea,” reported: “An emerging consensus says the next downturn may need to be fought with direct and permanent injections of cash—often called ‘helicopter money’—and that central banks can’t deliver it alone.”

Bloomberg wrote that “one solution is to combine” fiscal and monetary policy “for example, by letting central banks create money to finance government budget deficits.”

Historically, this is known as debt monetization, and is universally condemned in economic textbooks as the action of tinpot dictatorships and desperate regimes.

The article concluded with a quote from Joachim Fels, global economic adviser at Pacific Investment Management Co., who told Bloomberg: “Central bank independence increasingly looks like a brief historical episode that peaked around the turn of the century.”

Hedge fund manager Ray Dalio went further, proposing a “monetary policy 3” that goes beyond “quantitative easing” to the realm of debt monetization, explicitly naming the monetary policies followed by governments during World War II as examples for the present.

The rapidity with which the Fed has moved to prop up markets, and its inability to return to a “normal” monetary policy, has prompted warnings that the next phase of the economic cycle may not be just a financial crisis like in 2008. It may well be panic involving the government debt of major economies, and even major currencies themselves.

“Ultimately, faith in the fiat-currency system relies on the perception that central banks are acting responsibly,” Danny Yong and Nikhil Srinivasan wrote in the Wall Street Journal. “Should there be a loss of confidence in the US dollar as a store of wealth, there could be significant capital flight, even a collapse in the currency. While this seems far off, continued US monetary and fiscal profligacy will eventually test the faith in the fiat-currency system.”

They concluded: “Given how alternative stores of wealth such as gold and cryptocurrencies have outperformed all major currencies in 2019, we could well be at the cusp of a crisis of confidence in fiat currencies.”

The ruling classes all over the world responded to the 2008 financial crash by putting the burden of the crisis solely on the working class, slashing social spending and expanding contingent and low-wage employment while providing unlimited cash to bail out the banks.

The pinnacle of this response was the restructuring of GM, which slashed workers’ wages and ensured a decade of bumper profits. With GM now demanding even further cuts to workers’ wages and health care, the ruling class is seeking to once again make the working class pay for the next phase of the global economic crisis.

We need your support

The WSWS recently published its 75,000th article. Become a monthly donor today and keep up this vital work. It only takes a minute. Thank you.

Germany PMI Falls Into Overall Contraction Levels – Eurozone As A Whole Not Far...

First do no harm. Why healthcare needs to change – The European Sting –...

Horns Are Growing on Young People’s Skulls Due to Phone Use: Research | Technology...

Why Apple, Google are snatching up start-ups to fuel innovation